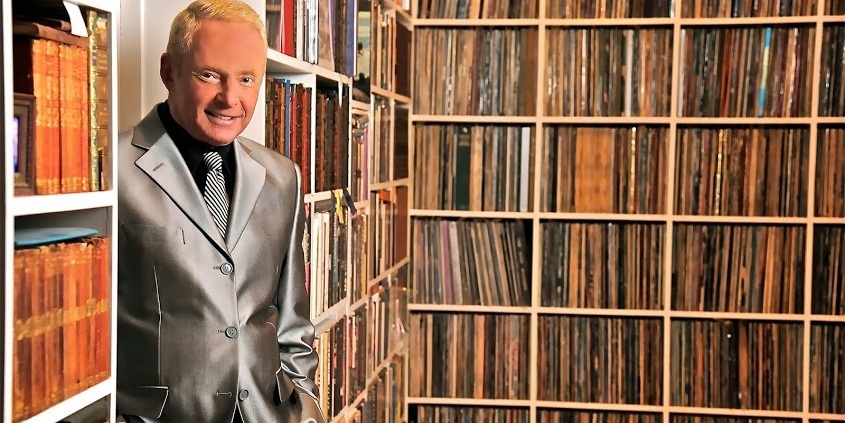 The spoken word can affect the heart and mind of the receptive. By its very nature the spoken word tells the story. It is true we all have a story…and through the voice of not just Elliot Mintz, but many others we wish to share with you the story of this man.

Throughout Elliot Mintz: A Sound Portrait, we will meet many people including Roy Tuckman, known to his listeners as Roy of Hollywood who is a radio host, producer and engineer who has been on the radio airwaves covering the late 1970s all the way to the present. There is famed freeform radio personality, DJ Jim Ladd who has become synonymous with the idea of radio as an art form without restrictions, who is now heard on Sirius XM Satellite Radio. Then we will meet publicist Michael Levine who has written several best-selling books about public relations. Elliot Mintz decided to tell his story through a website, ElliotMintz.com. He calls it a “Cyberography”. The technical artist and webmaster Te Kay will also be joining us to talk about how very fragile tapes going back to the 1970s were transferred to digital and have been made available to the world.

Elliot Mintz’s eyes have seen some very extraordinary events.  He has spoken with many people who will go into the chronicles of history for their art and work.  Elliot Mintz first chose to express defining moments by allowing others to communicate through him as a conduit. Elliot Mintz started as a student of communication…but, his exploratory spirit never went away. His career on the radio was more about listening than talking. He liked to ask the questions and in his words, “Get out of the way.”  Elliot Mintz interviewed some of the most iconic people in history: Salvador Dalí, John Lennon, Bob Dylan, Yoko Ono, Norman Mailer, Ray Bradbury, Baba Ram Dass, Alan Watts, and even people like Groucho Marx and John Wayne, Jack Lemmon and Jack Nicholson.

Listen or read the complete Roy of Hollywood Interview

In an era of bottled radio entertainment, the standard audio fare can be had by the case. It is the flat champagne of the establishment vineyard. The era calls for a free spirit. Enter Roy Tuckman (better known as Roy of Hollywood to his radio listeners.)

Leave the taste for common radio at home. Roy does not do the “norm.” His work expresses his passions and interests. That doesn’t mean that he dominates the airtime. Like a conductor on a train, Roy drives the show, he doesn’t feel the need to get out and push.

A veteran of radio for nearly 40 years, Roy of Hollywood goes on at midnight in what has been called “radio for night people.”  His program is called “Something’s Happening,” heard in Southern California on KPFK 90.7 FM.  Rather than talking himself, Roy of Hollywood prefers to play interviews, poetry readings, lecture tapes and even old radio broadcasts of mystical people like Alan Watts and Jack Gariss. Consciousness and the mind are explored. In a rare interview, Roy of Hollywood shares the great moments and memories of his career in radio, his notions and opinions on culture and its icons. In this excerpt of our talk, Roy of Hollywood gives us his insight on both his friend and colleague Elliot Mintz and the official Elliot Mintz website. Get onboard for a ride through the mind and magic of Roy of Hollywood.

Ladies and gentlemen, it is a pleasure to introduce you to this man, Roy of Hollywood. He has hosted Something’s Happening on KPFK out in Los Angeles for 38 years. Now that brings to question this, is there any radio show out in Los Angeles that has been on the air as long?

Not that I know of. Although, there are, I believe there are shows that have been on longer than 38 years but are no longer on. Ray Briem I think was on for over 40 years on KABC. He was a conservative talk radio show host with KABC.

It is quite remarkable. But the man behind the website, Elliot Mintz, who would you say he is?

I don’t know. Elliot did a program on KPFK in the 1960s. He did several programs, one called Looking Out then one called or Looking In and then Looking Out. He had just come fresh from LACC Media School and KPFK was again in the earlier days that had a lot of open time and it was looking for stuff or allowing stuff to come on. They sort of stuck him on the air. He brought in a young audience and also expanded our small spiritual or metaphysical audience, too and he’s an extraordinarily talented interviewer. He has an amazing empathy and interest in people and it was a real treat to listen to him and get to know him.

KPFK was his first soiree into the media and then he grew. He went on to several other stations and then on television and was a major, I think CBS television reporter and got into promotion and became friends with John Lennon and Yoko and spent a lot of time with them. And then got acquainted with or in business with I think they’re A-list celebrities, but has somehow never lost his sense of humanity which is extraordinary. He was an activist and he led a big parade in the Sunset Strip to take back the Sunset Strip. He was instrumental in organizing a love-in, the first love-in which was huge in Exposition Park. It was a formative period in the 1960s. He introduced in a major way Ram Dass and Jack Gariss. He interviewed Alan Watts and just did a lot of explorations of reality inside and outside and he was always interesting, and even though he was younger than I and his audience I guess was younger than I, I still found him really interesting and I was a big listener.

From your experiences knowing him in the professional sense that you’ve known him, do you think that Elliot is kind of a magnetic person?

Oh, yeah. He’s one of a kind, one of a kind. He’ll come right out and he eliminates a huge amount of gains by saying “I am not a smart person.” He says right away so that eliminates all of the competition for how smart you are, how much information you have, how much history you know, how intelligent you are and that kind of sword fighting and it’s very disarming. And he’s just hugely empathetic. I’m not a trusting person, but I trust Elliot. This is why I’m doing this interview at all but I do, I love Elliot and a lot of people love Elliot. He’s just an amazing, one of a kind person. I have barely touched his background and his experience, but I would say visit his website which is free to see all the things he’s done and things he thinks and the people that he’s had is eight million.

I think it’s not that many, but I think it’s 240 chapters of the “Lost Lennon Tapes” which was a national radio program playing the tapes that John Lennon made that had never seen the light of day and that he played. It was also, I would call, more than anybody could possibly want to know about John Lennon, but also if you’re interested in the Beatles and the formative and the background and the other side, it’s there and he has a lot of that posted, and actually the Iranian hostage program is there and it’s just an amazing website. Again, it’s free. This is not an advertisement for something that’s going to make some bucks or something.

What did you find on ElliotMintz.com that was particularly interesting to you?

I liked his background. He has a lot of material by Marianne Williamson which surprised me. I haven’t done that much exploring on it because I spend a lot of time listening to things that are going to be or not going to be on my program, and none of that is going to be on my program, because of the various copyrights. Although, I’m sure Elliot would allow that. His having Jack Gariss on was the major thing that Elliot did in my life or in many lives, and Jack Gariss was a teacher and a pioneer and never got famous. He never wanted to, I’m pretty sure. But having Jack on, a video with Jack Gariss is just astounding.

It happened for the first time in many years while we were doing the show and I was just carried away. I was just watching Jack and I completely forgot that “Hey, you’re on the radio, you idiot. You have a show to shepherd.”

A lot of Ram Dass, Ram Dass also was a major, major person beginning in the 1960s, not just because he was a partner with Tim Leary in the university and then solidified experiments. But Ram Dass was the first major person that was like a regular American person. He was a psychologist who got interested in eastern spirituality and went to India and found a guru, and learned a lot of things, and translated eastern mysticism into western language, and he was just a major, major person. Elliot had him on many times and there’s a great deal of Ram Dass on Elliot’s website as well as a great deal of Tim Leary that I also had on my show. You can get lost in that place, –

Roy, I know you don’t normally do interviews so I have to express my gratitude. It’s been a good experience for me to talk to you. I admire what you do.

Well, thanks Paul and you can thank Elliot for arranging this and he sees great things for your future. His judgment is tops. You will obviously have a successful career and don’t be there will be setbacks and don’t let those bastards get you down.

Thank you. I will try. I know that they can do that.

Roy, thanks again and have a wonderful day.

Okay, you too Paul.