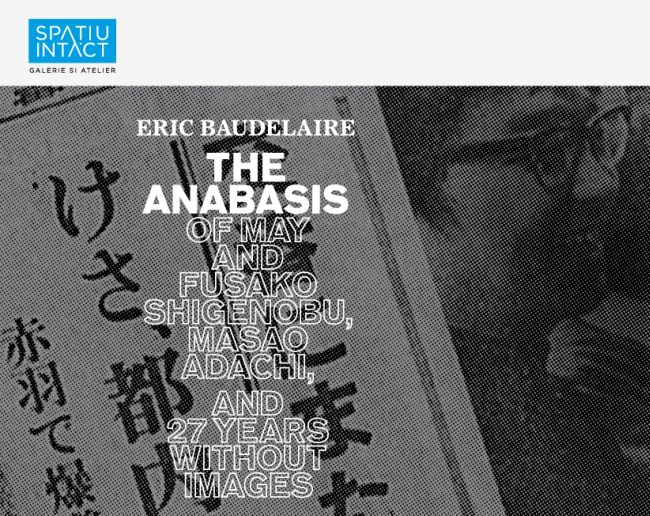 Exhibition of French National Fund for Contemporary Art in Paris organised by SPAȚIU INTACT in partnership with The French Institute in Cluj-Napoca.

French artist born in 1973, Eric Baudelaire explores the narative possibilities of the documentary and proposes a reflection upon the staging of reality which creates a fascinating ambiguity.

The Anabasis of May and Fusako Shigenobu, Masao Adachi and 27 Years without Images is an installation comprised of a 66 minutes film, nine silkscreen prints and a libretto.

Who are May and Fusako Shigenobu? Fusako — leader of an extremist left-wing faction, the Japanese Red Army, involved in a number of terrorist operations — has been in hiding in Beirut for almost 30 years. May, her daughter, born in Lebanon, only discovered Japan at the age of twenty-seven, after her mother’s arrest in 2000. And Masao Adachi? A screenwriter and radical activist filmmaker, committed to armed struggle and the Palestinian cause, was also underground in Lebanon for several decades before being sent back to his native country. In his years as a film director, he had been one of the instigators of a ‘theory of landscape’ — fukeiron: through filming landscapes, Adachi sought to reveal the structures of oppression that underpin and perpetuate the political system. Anabasis? The name given, since Xenophon, to wandering, circuitous homeward journeys.

“It is this complicated, dark, and always suspenseful story that Eric Baudelaire — an artist renowned for using photography as a means of questioning the staging of reality — chose to bring forth using the documentary format. Filmed on Super 8 mm, and in the manner of fukeiron, contemporary panoramas of Tokyo and Beirut are blended in with archival footage, TV clips and film excerpts as backdrop for May and Adachi’s voices and memories. They speak of everyday life, of being a little girl in hiding, of exile, politics and cinema, and their fascinating overlap. All of which adds up not so much to an enquiry as a fragmented anamnesis”, Jean-Pierre Rehm from the FID Marseille catalog said.