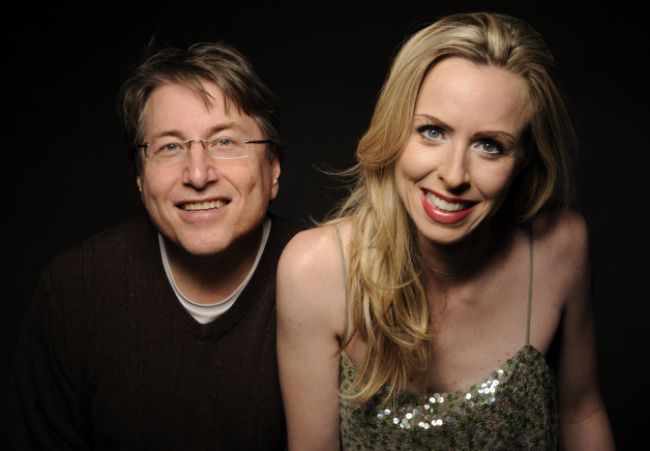 One of the people who is associated with Letterman, of course the announcer, Alan Kalter.   So tell me, did you go to him or did he go to you about being in ‘Hereafter?”

Oh no, I went to him.  I was looking for that voice….I was looking for two things.  His part of the show is interesting.  He only has two big impacts in the show.  One is the character of Robert Weldy, who is very much like Robert Osborne on Turner Movie Classics.  The guy who introduces the movies and has that beautiful, mellifluous voice and speaks eloquently about these old movies and movie stars.  So I wanted Alan for that, but I also needed almost like a voice of God, like a James Earl Jones type power to sell that beautiful poem at the top of the show, which was not written by us, but is one of the most beautiful analogies…hopeful analogies about what happens when someone dies.  So I emailed him a script and said, “Hey Alan…would you mind just kind of reading this?”  One is more of a voice-over like the poem is more like someone in church like a pastor and then the other one was like Robert Osborn.  He sent me an email back (laughs) and something that he had done in his home studio and it’s the one I used.  I’ve used it for like eight years now, the same track…still beautiful.  And when I put the music underneath it, I got goosebumps.  Fantastic!

What about Danny Aiello?

Danny’s a great, dear friend of Frankie and I.  He’s so sweet and generous with his time.  There was at one point, the psychic in the show was in his mid to late seventies and actually Danny is young for that character.  We had these beautiful songs, ‘Talk to Me’ and ‘Heart and Soul’ and I said, “Hey Danny?  Would you sing these demos for us?”  He said, “Sing the demos?  I want to be in the show.” I was like, “Oh my god!”  We were still a ways off, we were working on the songs.  He did an amazing job on the tracks and then like the story changes.  The psychic was no longer like that age.  He was a lot younger, you know?  So we had to…Danny’s  such a good friend…he’s like, “Yeah, well, I’m still singing these songs no matter what.”  We went into the studio and recorded the pieces and Danny’s the greatest.  He’s come to all the performances and has been a really great, great, dear friend of the show over the years.

When somebody goes to see ‘Hereafter,’ what do you want them to get out of that experience?

The freedom for one night to speak freely and share the people that they’ve lost in their lives with their friends.  You know, it’s a very difficult conversation to have.  People don’t want to hear it.  Life goes on.  They don’t want to hear about your mom.  It’s not that their mean about it, but you know It scares them.  When you sit in the Snapple Theater and you see the show, and you’re sitting in a room with two hundred people you don’t know except for the few people you came with and every single person is crying and it’s audible.  And they’re crying, but they’re not sad.  They’re crying because they’re living through these characters and the ending is so powerful and hopeful without really being too “Polly-Annish” “Oh, everything is going to be great,” there’s as many questions at the end as there are in the beginning but everyone’s got this beautiful, communal feeling.  They’re crying together, there are tissues all over the place and I’ve been told by many people who have seen the show, after it was over, it was the most incredible post-show dinner conversation they’d ever had or they’d had in a long time because that night everyone was on the same page.  They were all able to have that conversation about a couple of conversations about just remembering the loved ones that they had lost without bringing the room down because everybody was just comparing notes and then shifting into, “So what do you think happens when a person dies?”  It just became this awesome, awesome dinner conversation that was triggered by the show.  And then, the big hour for us is when a lot of those people come back with someone that they feel needs to see the show.  Who, in most cases, doesn’t want to see the show because it sounds scary to them.  It’s like, “Trust me, you need this.”  That’s very rewarding.

What is your dream for ‘Hereafter’ now?

A lot of people would think I should say “Broadway,” right?  But my dream for it is for it to be performed regularly and in as many companies as possible.  I don’t care how small.  I don’t care if it’s a high school production, if it’s a local church group or synagogue group.  The show’s nondenominational….it could really be played by any company…any organization.  My goal is for it to be running forever in all these incarnations and if it ever makes it to Broadway one day, “Wow!”  That would be great but I’m not going to hold my breath.  I’ll be just as happy to produce a local version.

What do you feel now that Letterman is going to be retiring?  What, when you go to work every day, what’s going on in your head?

I feel very sad.  I feel in some ways it feels like a death.  It feels like a passage that I’m not ready for of saying goodbye that I don’t want to do because it feels too soon or is there ever a time where it’s good to say goodbye?  It’s hard.  I’m excited about the future.  Stephen Colbert is going to be fantastic!  People have no idea what they’re in for.  I know it’s going to be a great show.  But right now, I’m living with a loss of what we’re about to lose.  It’s been 33 years on TV.  Since 1982, but I had the honor of being on ‘Letterman’ in 1982 so there’s a whole other angle that I feel, “Wow, I was here at the beginning.”  I could say, “I had my fifteen minutes of fame, you know?  I was there.  I was on that show.”  I wish I was the guy who threw the tomahawk on the ‘Johnny Carson Show,’ but it wasn’t that memorable but I was there (laughs).  I can say I was there and I’m going to be there at the end.  It’s going to be…the thing about ‘Hereafter’…one of the things I love about the word, “hereafter,” it literally means, “From this moment on.”  It’s a legal term, right, when you see it in a contract, you know, “Worldwide Pants, hereafter referred to as WWP,” for example, and it truly is when someone dies or any kind of significant change in a person’s life, good or bad, when you get married or divorced or a death in the family or David Letterman retiring.  From that moment on, things are going to be different.  Sometimes they’re going to be better.  Sometimes they’re going to be not better—sadder.  There’s a major “hereafter” moment coming on May 20th when Dave goes off the air.

What is the best thing about being Vinnie?

(Laughs)  I haven’t figured that out yet!  I know my poor wife is exhausted living with being Vinnie.  She’s awesome, by the way.  I couldn’t accomplish anything without her. I don’t know…I think my outlook on life is one of “we are very, very lucky to be here and a day when no one dies is an awesome day.”  Everything else is like I couldn’t care less if there was a five hour traffic jam or the heater blew up and costs $3,000.00 to fix— if that’s the worst thing that happens, that’s a great day.

What would you like to say to anyone who’s listening in, wherever they are?

Oh my goodness!  First of all, I love your website and everything that you do and I’m honored that you’ve taken the time to talk to me.  I would just encourage people to, you know, follow me on Twitter.  I do some really good re-tweets (laughs).  Go to Hereaftermusical.com or @vpfavale on Twitter…just, let’s be in touch!  I’d love to meet everyone in any capacity, say “Hi,” on the street if you recognize me.  I don’t think you would, but I just love people so stay in touch, folks.

My last question:  who is Vinnie Favale?

He is a hopefully middle-aged man, which means he’s going to live to 105 if I’m in the middle of my total age.  I think that’s for other people to say.  I think he’s a really cool guy, great dad, great husband, and great friend but that’s just me talking.  That’s the liquor talking. (laughs)  You can’t go by me.